Cristiano Ronaldo put the jeers of the Bernabeu crowd behind him for a day as he teamed up with renowned photographer Mario Testino.
The Real Madrid forward helped his side to a 5-0 win over Rayo Vallecano on Saturday but was whistled at by his own fans when he passed up a late chance.
The Portuguese appeared in good spirits on Monday however as he posed with Testino and girlfriend Irina Shayk following a photo shoot for Vogue magazine. 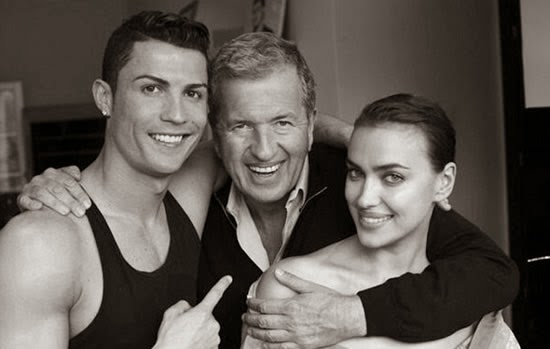 In form: Ronaldo has scored 44 goals for Real Madrid this season and was on target again last weekend

Boo boys: Ronaldo was jeered by his own fans after passing up a chance in Real's 4-0 win over Real Vallecano
Testino has been described as the 'the world's most prolific magazine and fashion trade photographer' and so is a perfect fit for the world's greatest footballer.
Ronaldo has scored 44 goals this season and will lead his side against Borussia Dortrmund in the first leg of their Champions League quarter-final in Madrid on Wednesday.
And his manager Carlo Ancelotti backed his star man to help Real win Europe's greatest prize.
'We need the help of everyone. Whistling Cristiano is incomprehensible,' he said.

Write caption here
'I have always said that sometimes I understand whistles because they can be deserved. Right now? No, the players are putting in a lot of effort.
'On Wednesday, we'll have a great atmosphere at the Bernabeu because everyone is dreaming of the Decima [10th European Cup] and they know we can win if everyone gets behind the team. Together we can achieve the dream.
'If we win all the games that we have left, at least we win the Champions League and the Copa del Rey.
'We just have to believe in ourselves and be positive.'