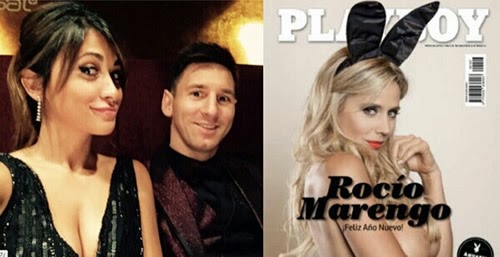 Rocio Marengo, 34, suggested to the Arde Pinamar radio show on FM Beat 90.9 that she had been invited to a party in Europe by Lionel Messi.

During her interview Marengo said:

I can tell you that I've met many players who have hit on me. One 'number 10' hit on me. He was playing outside [his marriage], you know.

I have stories of players cheating. Tevez? No, but from the [Argentinian] national team.

I was invited to Europe, but out of nowhere. 'He told me '? Baby, you will come to Europe to a party' but he never gave me a date.

The more you ignore them [footballers] the more they write to you and speak to you.

Those comments have since spread around South America, and Rocio Marengo has now revealed that she is under the threat of a lawsuit from Messi's partner, Antonella Roccuzzo. In a follow up set of quotes released today by Marengo, she has said:

I did not refer to her husband [Lionel Messi].

They had invited me to a party, but in the end I did not go. It was at the time of South Africa (World Cup 2010) because I remember that at the time I travelled there.

I will not say who me invited. I'll never say.

Over the past few weeks Rocio Marengo has also been arguing her innocence on social media, and her updates can be read (in Spanish) below together with some of her Instagram updates.