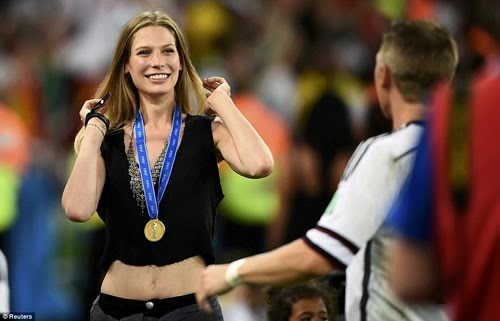 Bayern Munich star Bastian Schweinsteiger appears to have chosen a strange way to make it known that his relationship with Sarah Brandner is over.

Brandner, the 26-year-old German model, was alongside Schweini as Germany won the World Cup in Brazil, but soon after rumours began filtering out that the pair had gone their separate ways.

Although neither side has ever spoken publicly about ending the relationship, recent weeks have seen Schweinsteiger getting very close to tennis star Ana Ivanovic, with the Bayern man having gone to Australia to watch her in action.

Now a new twist in the tale has been spotted.

Bayern are currently in Qatar during the winter break, and Schweinsteiger was seen wearing Nike boots in training with 'Sarah' written on the side earlier in the week.

However, when Bayern played a friendly on Tuesday, Schweinsteiger had put a black marker pen over his former partner's name in what is being taken as a sign that the pair are truly done.

See the pictures of Schweini's boots below.