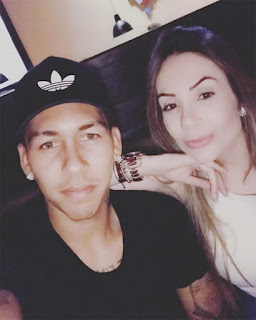 Roberto Firmino and his wife Larisa

Roberto Firmino was in an amorous mood as the Liverpool midfielder relaxed with his stunning wife Larisa.
The Liverpool forward was part of the Brazil side that eased to an emphatic 3-0 win against their bitter rivals Argentina in the 2018 World Cup qualifying campaign at Belo Horizonte earlier this week.
Firmino has been in stunning form for the Merseyside outfit in the 2016-17 Premier League campaign so far after a return of five goals and three assists in 11 top-flight appearances.
However, the 24-year-old was taking a well-earned break from football as he relaxed with his wife Larisa ahead of Brazil's upcoming clash against Peru.
Firmino posted the above selfie on his Instagram page and wrote the following caption: "My love"
Liverpool supporters will be keeping their fingers crossed that Firmino can avoid injury ahead of the Reds' trip to Southampton ahead of their next Premier League game on Saturday 19 November.
The Reds are in first place in the Premier League table and a point ahead of second-place Chelsea.
Tweet