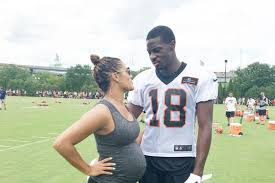 AJ Green’s wife Miranda Brooke tied the knot with him in March of 2015. They even hired a hot dog stand! What’s better than a hot dog stand at a wedding, you tell me? Seriously, fancy, gourmet food is great.  But look, the best part of the wedding is drinking beers with your buddies and dancing.  WHO DOES THAT AFTTER A GIANT STEAK?  You know what kind of steak goes well with open bars and dancing?  Tube steaks (save those damned jokes).  Hell yes, AJ Green.  We salute you. 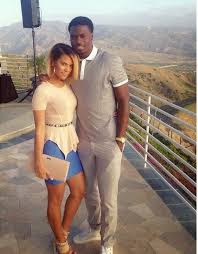 OK, enough about hot dogs.  They’re certainly delicious, but we don’t care if you like them.  Tell me about AJ Green’s wife already.

OK, ok. Fine.  But, hot dogs are delicious.
AJ Green’s wife looked absolutely incredible in her wedding pictures. She’s got that special something. Because of this, Mr. Green put the ring on her finger.  AJ and Miranda have almost turned this family into a four-tiered unit.  Why almost?  Well, in 2016 their first son, Easton was born.  And given the shape AJ is in, I’m sure he commenced a training program immediately! You can bet Miranda is over the moon now that she is officially a mother. Every social media post she put up the birth of their son, Easton, is a picture of him.
Now, fast forward to 2018, and AJ Green’s wife is pregnant again.  And how do you announce a pregnancy in 2018?  C’mon folks, you know that answer. 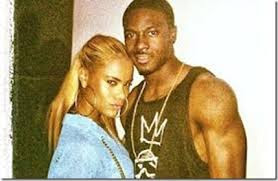 Miranda certainly documented her pregnancy in full photographic detail.   Normally, as a 30 something hipster I don’t care too much about the pregnancy narratives on social media.  I’m just kicking it honestly with you.  So I guess I have to make up for the honesty by saying AJ Green’s wife Miranda looked fantastic in her pregnant pics! It was an interesting journey to follow from a distance – both physical and timeline distance.  She tended to post one every week or two as she got bigger and bigger. Look: these are classy and cool people. I’ve seen pictures of Miranda lifting some serious weights in the gym, and she can throw down some military presses! She will be a cool mom, no doubt. 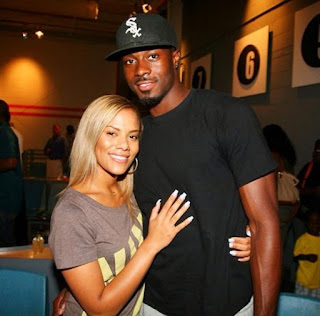