Eighteen months ago, writing a post about Becky Lynch’s husband to be Seth Rollins would have absolutely been reversed.  For sure we would have been talking about Seth Rollins girlfriend, and Seth Rollins wife instead.  But ever since that fateful attempt at a heel turn in Summer Slam 18, Becky Lynch became the Man, and the rest is history.  There is no star that shines brighter in the wrestling world.  Even though Seth Rollins might be a top 5 star in the entire company, he’s still the #2 name on the marquee in their relationship. 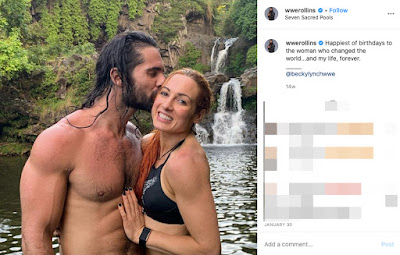 Or to be even more technical, it’s still just fiancee if you prefer.  These two began dating at shortly before the Royal Rumble in 2019.  It was a good weekend for them both, as they both won their respective rumble matches, AND shared their first kiss.  I hate the fact I know this information off the top of my head, but when you watch as many WWE Network documentaries as I do, it’s out there for you plain as day.  In fact, here is another kiss immediately following Rollins winning the Universal Title from Brock Lesnar at Wrestlemania 35.  Again.  Another thing I first learned from WWE Network documentary.  Le sigh.
The couple got engaged in Maui in August of 2019, though no word on if the wedding has taken place.  Hell, with the COVID-19 crisis, even if there was a wedding planned, it almost certainly has been put on hold.  But, COVID-19 ain’t stopping biology……

That’s right.  The real reason you probably landed on this post today.

The night after the 2020 Money In the Bank Pay-Per-View, Becky Lynch opened Monday Night Raw by revealing personal news.  She relinquished the Raw Women’s Title in the briefcase, while also revealing some personal news.

Congratulations, @BeckyLynchWWE!!!!
What a moment on #WWERaw! pic.twitter.com/yWnHB3Dc4o
— WWE (@WWE) May 12, 2020
That’s right, Becky Lynch is going from The Man, to The Mom.  We’re certainly assuming Becky Lynch’s husband to be, Seth Rollins had a hand in this momentous life occasion.  Wrestlers hook up all the time; Macho and Liz, Cena and Nikki, Zelina and Aleistair, Lana and Rusev, Charlotte and Andrade, and on and on and on.  These two are at the peak of the industry, and also seem like two of the cooler in the business.  Love to see news like this even if it means Becky if off screen for a while.
We know she’ll be back.  There’s still that Ronda rematch to headline Mania in 2021, right!